Synthesis technology of graphene film with a given number of layers 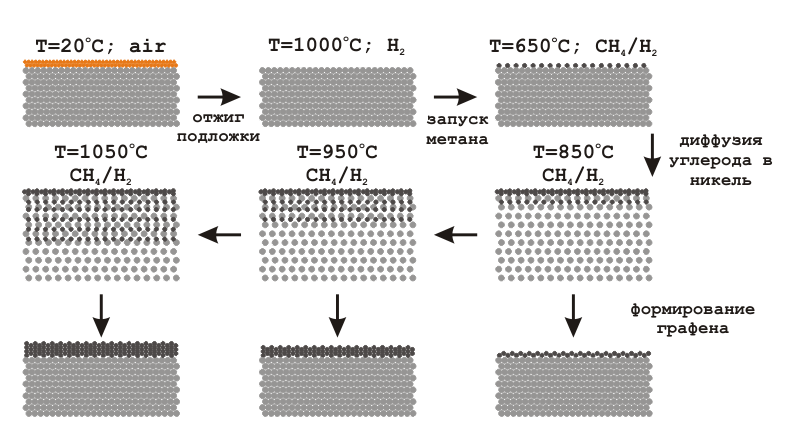 Rusgrapehene specialists together with colleagues from General Physics Institute of the Russian Academy of Sciences and the Institute of Materials Science of the Vietnam Academy of Sciences and Technology have developed a method for the synthesis of CVD graphene with a controlled number of layers. The results of the work were published in the journals Physica Status Solidi C [1] and Physica Status Solidi B [2] in 2010 and in 2017, respectively.

Flexible and transparent electrodes, sensors, membranes, memory cells, saturable absorbers for lasers are far from an incomplete list of actively developing applications for graphene films. It is important to be able to produce films with a given number of graphene layers - a key parameter that determines their unique physicochemical properties.

To this end, we have developed a method that allows you to control the thickness of the synthesized graphene film (from 3 to 50 or more layers) on the surface of nickel foil, one of the most popular catalytic substrates for the synthesis of graphene.

In the experiments, an original setup developed by Rusgrafen was used. At the first stage, annealing of the nickel substrate was carried out, placed in a vacuum chamber with water-cooled walls. The chamber was filled to a pressure of 100-500 mbar with a mixture of argon and hydrogen in a ratio of 4: 1. Then, the substrate was heated by passing an electric current to the annealing temperature, which was maintained for a certain time. The increase in current was controlled by the installation software. The temperature was measured directly from the nickel substrate using an infrared pyrometer. It was found that the current rise rate, temperature, and annealing time largely determine the quality of the graphene film formed on the surface of the nickel foil in the second part of the experiment.

Methane (CH4) was introduced into the pre-evacuated chamber, and the nickel substrate was again resistively heated. At a temperature of 500°C, methane thermal decomposition and carbon deposition on the substrate occurred at the metal surface. At 750°C, carbon atoms began to diffuse into nickel, increasing its electrical resistance. By changing the resistance of the substrate, one can judge the number of carbon atoms that have stuck inside nickel. And this determines the thickness of the graphene film, which is formed after cooling the substrate. Thus, by controlling a number of parameters — the heating rate and the temperature of the substrate, its resistance, concentration, and gas pressure, it became possible to synthesize films with a given number of graphene layers. For example, a three-layer graphene film is formed at a maximum temperature of nickel foil 30 degrees higher than the temperature of the onset of diffusion (for a methane concentration of 2% and a gas pressure in the chamber of 500 mbar).